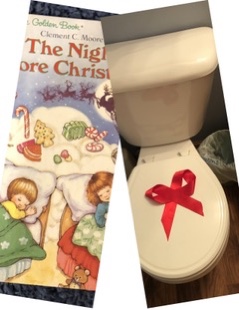 ‘Twas the day after New Year’s, when all through the house,

Not a neuron was stirring, not even a spouse.

The bottles were lined along the shelf with care,

In hopes that Bayer as’prin would have two to spare.

The feet were still nestled all snug in their Keds,

While visions of shouldas were replaced with insteads.

And hubby in his T-shirt, and my hair in a wrap,

So what is happening to cause all this clatter?

Too much acetaldehyde in the gray matter.

Nothing was happening in a flash,

The nausea, dry mouth, and point one oh blow,

At what point do those hangovers appear?

With water and vitamins given right quick,

Those rapid waves of peristalsis they came,

And Mr. Beam and Mr. Daniels you knew them by name.

On whiskey, on brandy, on good ole bourbon.

To the top of the gullet, to the pharynx wall,

Now rash away, gush away, flush away all!

So up to the porcelain bowl the night’s evidence flew,

With tacos, and cheese, and some mystery goo.

And then in an inkling, I remembered the proof,

As I drew in my head, calculating alcohol found,

Now drenched all in sweat, from the head to the foot,

But dealing with congeners is the hangover yack.

Liver enzymes erase what the mouth can sow,

With tincture of time, no one will know.

What is this malaise lying beneath?

Just give me a blankie to use as a sheath.

Sweet dreams of cures from the markets of Delhi,

Alas, nothing works, not even grape jelly.

But drinking again? Take advice from the elf.

There may be something to it for clearing the head,

As GABA receptors react with alcohol, it is said.

Carbohydrates are needed to get back to work,

So give me some sugar, ’cause it’s a brain quirk.

Take some thiamine for that red nose,

No acetaminophen – or it’s rest and repose.

Perhaps a little help with some milk thistle,

Just for nerve growth factor, not bodies of Nissl.

*Veisalgia is the medical term for a hangover.  It is derived from the Norwegian kveis meaning “uneasiness following excessive indulgence” and the Greek -algia meaning “pain.”